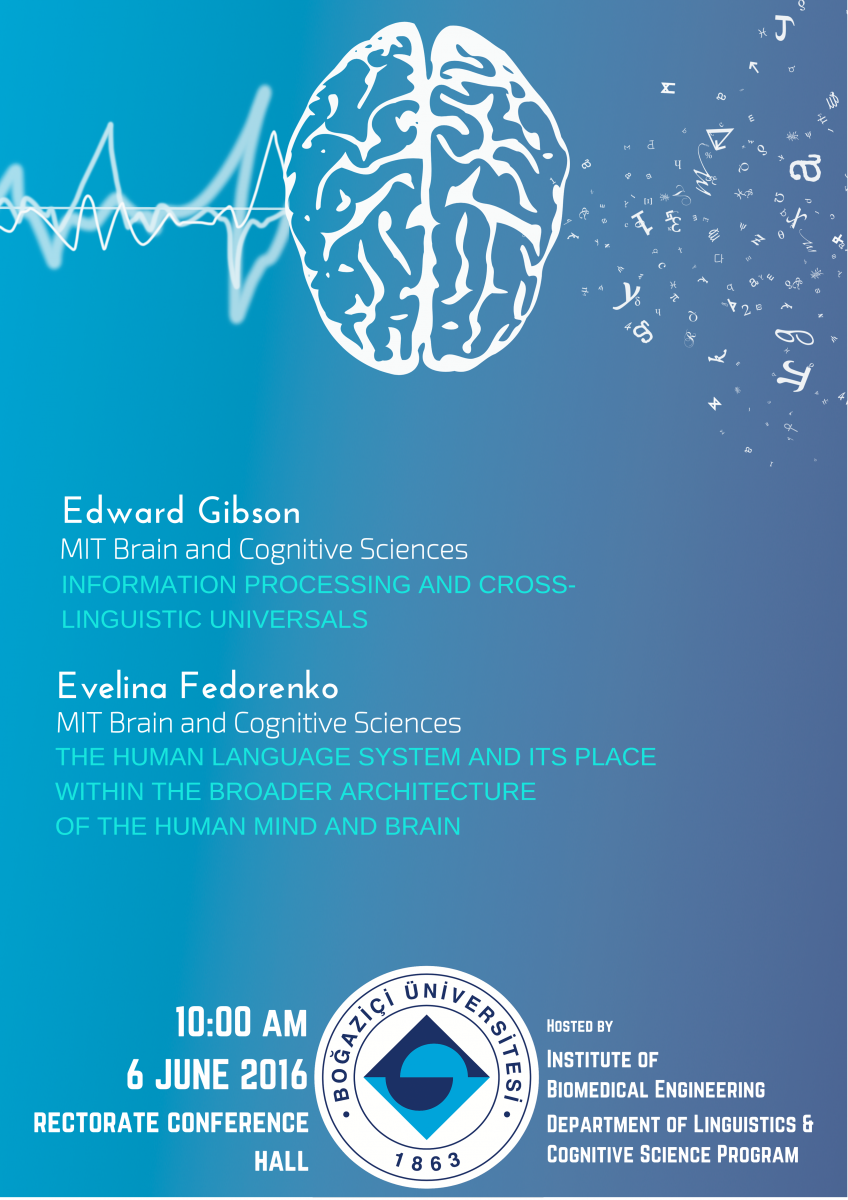 cordially invite all interested to the following talks by

THE HUMAN LANGUAGE SYSTEM AND ITS PLACE

WITHIN THE BROADER ARCHITECTURE OF THE HUMAN MIND AND BRAIN

Finding explanations for the observed variation in human languages is the primary goal of linguistics, and promises to shed light on the nature of human cognition. One particularly attractive set of explanations is functional in nature, holding that language universals are grounded in the known properties of human information processing. The idea is that grammars of languages have evolved so that language users can communicate using sentences that are relatively easy to produce and comprehend.  In this talk, I summarize results from explorations into several linguistic domains, from an information-processing point of view.

First, we show that all the world's languages that we can currently analyze minimize syntactic dependency lengths to some degree, as would be expected under information processing considerations.  Next, we consider communication-based origins of lexicons and grammars of human languages.  Chomsky has famously argued that this is a flawed hypothesis, because of the existence of such phenomena as ambiguity. Contrary to Chomsky, we show that ambiguity out of context is not only not a problem for an information-theoretic approach to language, it is a feature. Furthermore, word lengths are optimized on average according to predictability in context, as would be expected under and information theoretic analysis.  Then we show that language comprehension appears to function as a noisy channel process, in line with communication theory. Given si, the intended sentence, and sp, the perceived sentence we propose that people maximize P(si | sp ), which is equivalent to maximizing the product of the prior P(si) and the likely noise processes P(si -> sp ).  We discuss how thinking of language as communication in this way can explain aspects of the origin of word order, most notably that most human languages are SOV with case-marking, or SVO without case-marking.

Although many animal species have the ability to generate complex thoughts, only humans can share such thoughts with one another, via language. My research aims to understand i) the system that supports our linguistic abilities, including its neural implementation, and ii) its interfaces with the rest of the human cognitive arsenal.

I will begin by introducing the "language network", a set of interconnected brain regions that support language comprehension and production. With a focus on the subset of this network dedicated to high-level linguistic processing, I will then consider two questions. First, what is the internal structure of the language network? In particular, do different brain regions preferentially process different levels of linguistic structure (e.g., sound structure vs. syntactic/semantic compositional structure)? And second, how does the language network interact with other large-scale networks in the human brain, like the domain-general cognitive control network or the network that supports social cognition? To tackle these questions, I use behavioral, fMRI, and genotyping methods in healthy adults, as well as intracranial recordings from the cortical surfaces in humans undergoing presurgical mapping (ECoG), and studies of patients with brain damage.

I will argue that: i) Linguistic representations are distributed across the language network, with no evidence for segregation of distinct kinds of linguistic information (i.e., phonological, lexical, and combinatorial - syntactic/semantic - information) in distinct regions of the network. Even aspects of language that have long been argued to preferentially rely on a specific region within the language network (e.g., syntactic processing being localized to parts of Broca's area) turn out to be distributed across the network when measured with sufficiently sensitive tools. Further, the very same regions that are sensitive to high-level (e.g., syntactic) structure in language show sensitivity to lower-level (e.g., phonotactic) regularities. This picture is in line with much current theorizing in linguistics and the available behavioral psycholinguistic data that shows sensitivity to contingencies spanning sound-, word- and phrase-level structure. And: ii) The language network necessarily interacts with other large-scale networks, including prominently the domain-general cognitive control system. Nevertheless, the two systems appear to be functionally distinct given a) the differences in their functional response profiles (selective responses to language vs. responses to difficulty across a broad range of tasks), and b) distinct patterns of functional correlations. My ongoing work aims to characterize the computations performed by these systems - and other systems supporting high-level cognitive abilities - in order to understand the division of labor among them during language comprehension and production.